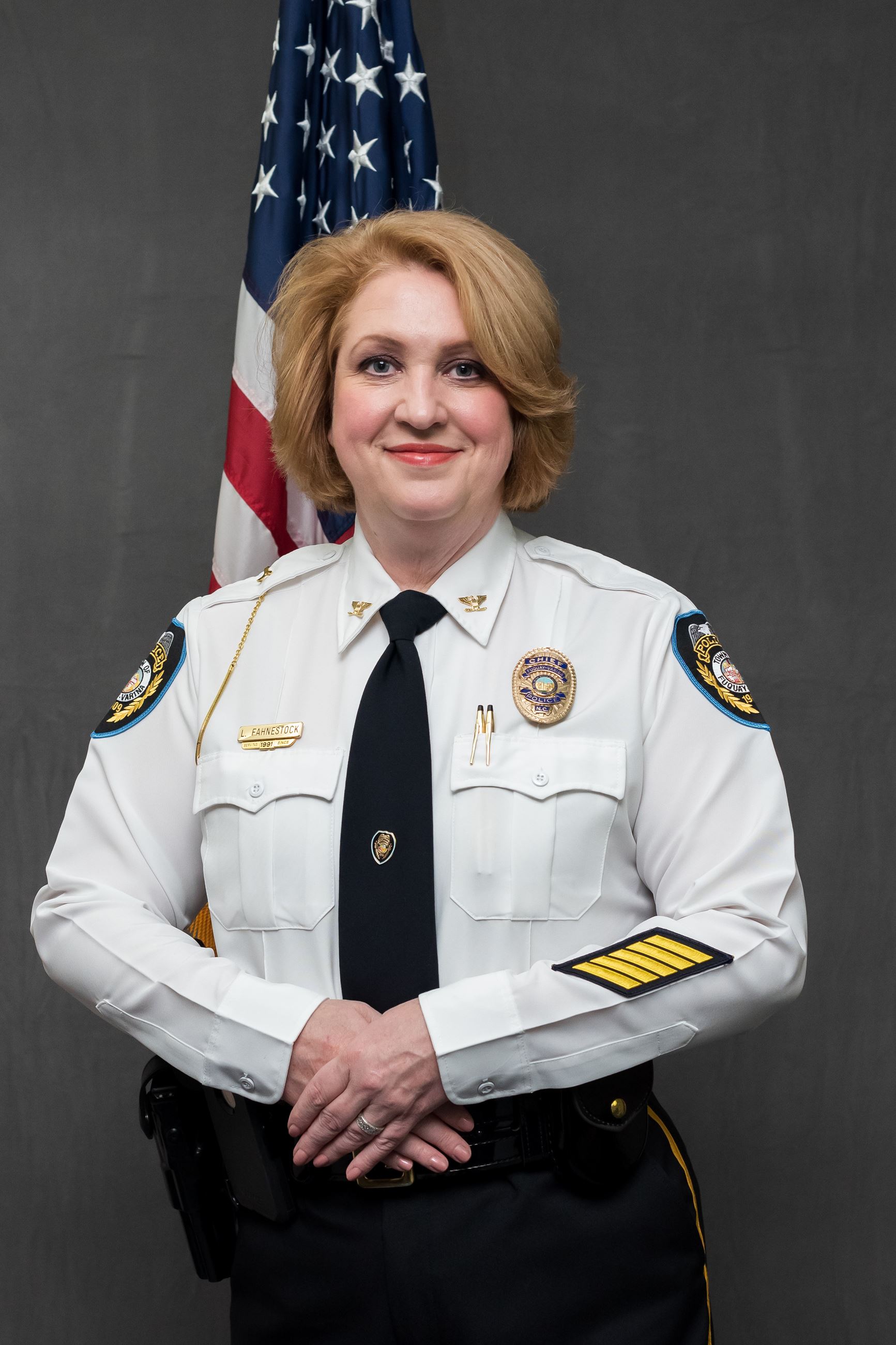 On June 1, 2015, Laura L. Fahnestock began her career as the Chief of Police of the Fuquay-Varina Police Department. That, however, was not the beginning of her distinguished law enforcement career. Her career began many years earlier while a small girl. Laura was well engrained with the love for law enforcement as she watched her father, Nelson Lockey, a Captain with the Raleigh Police Department serve with honor and distinction.

Laura’s law-enforcement career officially began in October 1988, when she served with the Raleigh Police Department as a civilian patrol officer and intern while attending Wake Technical Community College, earning her Associate in Applied Science Degree in Criminal Justice. Laura then attended N.C. Wesleyan College where she obtained her Bachelor of Arts Degree in Justice and Public Policy. While enrolled at N.C. Wesleyan, Laura continued to serve as an intern, only this time with the Rocky Mount Police Department. Laura continued to serve the Rocky Mount Police Department when, on May 2, 1991, she began Basic Law Enforcement Training (BLET).

On June 1, 2015, Laura was selected to become the first female Police Chief of the Fuquay-Varina Police Department. Under Laura’s leadership, the Fuquay-Varina Police Department expanded the department from 36 sworn officers and 6 civilian staff members in 2015 to 59 sworn officers and 8 civilian staff members in 2021. One of those positions was a crime analyst, which would help drive the department's approach to enforcement being data-driven and analytical in nature. That data-driven, analytical approach saw a reduction in both property and violent crime during her nearly 7-year tenure as Chief of Police.

Laura’s commitment to community-oriented policing was evident every day she came to work. From the beginning, she stressed the importance of building partnerships and bridges with community stakeholders. Laura implemented a 21st Century Policing Philosophy internally to include enhanced training focused on fair and impartial policing and procedural justice, enhanced community relationships and transparency of departmental operations, enhanced technology programs by adding body cameras, updated mobile in-car cameras and interview room recording systems, improved internal auditing systems within records and personnel management. Under Chief Fahnestock’s leadership, the department engaged in community outreach and building trust by implementing such programs as Coffee with a Cop, Barbershop Rap Sessions, Cops in the Park, Unity in the Community, Grow with the Police, and Bicycle Safety Community Rewards, and the “Other Side” videos, which garnered national acclaim.

Laura brought a personal touch to the position of Police Chief and will be remembered for her willingness to get beyond the patrol car and allow people to get to know her behind the badge, her humor, and her love for all things Sci-Fi.  Laura launched the Fuquay-Varina Police Department Facebook page which currently has more than 20,000 followers, the highest of any agency in Wake County. Laura embraced the use of social media providing valuable crime reduction information with a hint of humor through her #9 pm routine memes and her ability to highlight her staff.

Laura’s was supported throughout her career by her husband Van who she has been married to for 29 years, and her daughter Victoria. Without Van and Victoria, Laura’s career would not have been as successful as it was as they are her support system.

On November 1, 2021, Chief Laura L. Fahnestock announced her upcoming retirement on February 1, 2022. During her distinguished and extraordinary career with both the Rocky Mount and Fuquay-Varina Police Department, Chief Fahnestock: